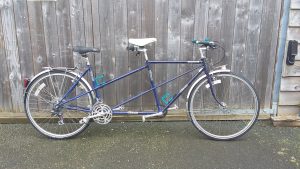 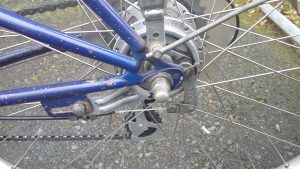 Once the bike was in the workshop, the stripdown commenced, so within a couple of hours it was just piles of bits spread around in various places. Needless to say, the cables were all corroded after standing for so long, so I replaced those with Teflon coated ones and new outers.

We opted for a combination brake/gear change lever set on the new handlebars – Shimano ST-EF51 that I had in stock. These were actually a 7 / 3 configuration where the existing gear arrangement was only a 6 speed freewheel on the back. More of that later.

So to the brakes – it made sense to me to have a separate lever for each brake, i.e. right lever for front brake, left lever for rear brake and adding a third lever on the stoker’s handlebar to control the rear drum (since doing this, I have seen other tandems with a similar arrangement). I also decided to try and fit V brakes to replace the cantilever ones as it was thought that they would be more efficient. This was fine on the rear, but due to the narrow fork it was not possible to fit a V brake on the front so we settled for new pads in the cantilever. The drum brake was disassembled (it was actually assembled very loosely on the back wheel because the rear hub had done it’s best to tear itself apart – the bearings were shot so the axle had been rattling around all over the place and caused a fair bit of wear to the hub). The brake shoes in the drum looked very shiny and glazed, and I wasn’t sure if they were contaminated or not as the braking was so poor, but after a good soaking in brake cleaner and a buff up with emery paper, then lubricating the pivots with coppaslip, they looked a lot better and moved a lot more freely and smoothly than previously. Cleaning the inside of the brake drum in a similar manner also made that look a lot better and it at least felt as if there was some much needed friction there when the brake was applied. An extra brake lever was fitted to the stoker’s handlebar to operate this.

As mentioned above, the rear hub was quite a mess – several episodes of broken spokes and riding with a deformed wheel had taken its toll so the whole assembly had a lot of play in it and was worn internally where the axle had been jumping about. I wasn’t even sure if the hub could be salvaged, but after stripping it and cleaning everything, then reassembling with new bearings and grease and adjusting it correctly, it all appeared to work as it should and ran quite smoothly, so we moved on to rebuilding the rear wheel. The rim is a Mavic and was in good order so new spokes were duly ordered – difficult to get hold of the 12 guage at anything less than extortionate prices so we opted for a stainless steel 14 guage. The hub and wheel are a 40 spoke arrangement, but the build was relatively trouble free and when all tensioned and trued looked good.